The 49ers have reached an injury settlement with running back Kendall Hunter, making him a free agent, according to Ian Rapoport of NFL.com (Twitter link).

Hunter, 27, hasn’t played since 2013. He missed all of 2014 with a torn ACL, but he returned to practice this summer and played in the 49ers’ last two preseason games. They subsequently placed him on injured reserve, however, and this injury settlement means he’ll be able to look for work elsewhere. He still could end up back with the 49ers, Matt Maiocco of CSNBayArea.com tweets.

Hunter has appeared in 43 games since the 49ers used a fourth-round pick on him in 2012, racking up 1,202 rushing yards and seven touchdowns on an impressive 4.6 yards per carry. 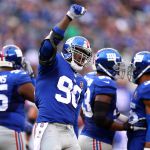