Former Chief great to get his one and only shot Saturday

Saturday vs Green Bay will be Jamaal Charles’ one shot at making the Broncos roster. Won’t play in the final preseason game. (NFL.com – James Palmer)

Nerdy Football Analysis: Charles has repeatedly stated he is healthy, but the Broncos are making sure they are giving him as much time as possible to show them what he can do. HC Vance Joseph promised Charles will play “a lot” against the Packers. As much as box scores lie in the preseason, Charles’ statistical contributions this weekend figure to be a pretty good indicator as to whether or not he will make the team.

Per a source with knowledge of the situation, Devontae Booker has a wrist injury. He’s expected to miss up to 6-8 weeks. It’s unclear how he was injured. He’s currently expected to be placed on the Physically Unable to Perform list. He would be able to exit PUP at any time before Week One. (Pro Football Talk)

Nerdy Football Analysis: The cause of the injury is unknown at this time. Jamaal Charles has been cleared for camp but he’s expected to be brought along slowly during August. Rookie De’Angelo Henderson is currently next on the depth chart but if the Broncos believe Booker’s injury lingers into the season, the could go after a free agent (Rashad Jennings, DeAngelo Williams) for depth.

Mark Sanchez Not A Lock For Broncos’ Roster?

Broncos head coach Gary Kubiak announced that Trevor Siemian will start the club’s third preseason game against the Rams, and that decision could have implications for veteran quarterback Mark Sanchez, as Mike Klis of 9NEWS writes. First-round rookie Paxton Lynch could leap Sanchez to become Denver’s backup signal-caller, and if that happens, Sanchez may not have a spot on the roster, Klis suggests. 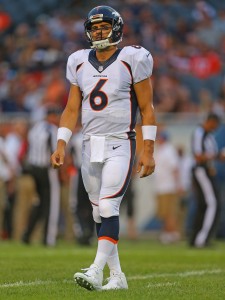 “I expected [uncertainty at QB],’’ said Kubiak. “We’ve got three quarterbacks, two of which weren’t on this team last year. One has one regular-season snap. So I knew this was going to take some time and I think it’s a credit to them in how well they’ve battled and pushed each other. It’s down to the nitty gritty here – I don’t have to but I’m going to make a decision next week.’’

Sanchez, whom the Broncos acquired from the Eagles earlier this year in exchange for a conditional seventh-round pick, has completed 66% of his passes during the preseason but struggled otherwise, as he’s tossed an interception, lost two fumbles, and been sacked three times. Siemian hasn’t been great either (17-of-23 for 163 yards and a pick-six), but if the competition is considered close between him and Sanchez, salaries could come into play.

As a former seventh-round pick, Siemian is only due to earn a minimum salary during the upcoming, but Sanchez is scheduled to earn $4.5MM, $1MM of which is guaranteed. Sanchez can also earn another $3MM through incentives, but the Broncos could clear $3.5MM off their books by releasing him before the start of the season. If Sanchez is going to be the No. 2 quarterback, his salary is manageable — but if he falls to No. 3, there’s a decent chance Denver isn’t willing to pay the price to keep him around.

The blockbuster trade between the Rams and Titans that saw Los Angeles acquire the first pick in the draft, with which it will presumably select a quarterback, could have a notable ripple effect on the Broncos’ pursuit of Colin Kaepernick, writes Troy Renck of the Denver Post. If the Rams take Cal signal-caller Jared Goff and the Browns, who hold the second choice, prefer Goff to North Dakota State’s Carson Wentz, it might lead Cleveland to trade down with a team that wants Wentz. If that team isn’t San Francisco, which is scheduled to pick seventh, it could result in the 49ers closing the door on trading Kaepernick. Renck doesn’t expect the 49ers to deal him without a legitimate solution at quarterback in place, and their best non-Kaepernick option right now is the less-than-stellar Blaine Gabbert.

More from around the NFL:

Connor Byrne and Zach Links contributed to this post.