Here are today’s minor NFL transactions as cuts aiming to trim rosters from 90 to 75 players have begun to commence. 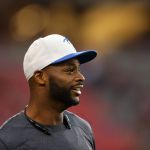