Free agent cornerback Brice McCain is scheduled to a pay a visit to the Buccaneers today, according to Jason Cole of Nerdy Football (Twitter link). Because McCain was cut last week by the Dolphins, he’s eligible to sign with another team right away, rather than having to wait for the 2016 league year to begin. 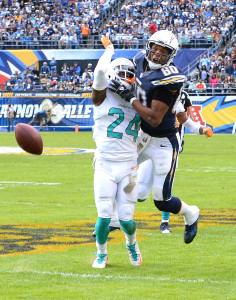 Although it appears the Buccaneers will get the first look at McCain, Tampa Bay isn’t the only team with interest in the veteran corner. According to Ian Rapoport of NFL.com (Twitter link), the Steelers also want to bring in McCain for a visit, though it may not happen until March. Rand Getlin of the NFL Network adds (via Twitter) that the Titans would also like to host McCain sometime after next week’s draft combine.

McCain, 29, signed with the Dolphins last March after spending five seasons in Houston and one in Pittsburgh. However, he lasted just one season with the team, as Miami opted to part ways with him last week in order to create $2.5MM in cap savings. McCain started 10 games and played 735 defensive snaps for the Dolphins in 2015, picking up an interception to go along with 39 tackles.

Since the Steelers previously employed McCain, their interest makes some sense, as does the Titans’ interest, since former Steelers DC Dick LeBeau is currently running Tennessee’s defense. There’s no obvious coaching connection for the veteran cornerback in Tampa Bay – though new linebackers coach Mark Duffner was on the Dolphins’ staff last year – but the club could use some help in the secondary, as we detailed in our Bucs offseason preview earlier this week.

Jordan Reed being evaluated for concussion