The Saints made the cornerback position a priority this offseason when they added former Patriot Brandon Browner and CFLer Delvin Breaux as free agents, but the team’s top corner won’t be available to start the regular season. According to Ian Rapoport of NFL.com (via Twitter), Keenan Lewis underwent hip surgery yesterday and will miss about four to six weeks of action.

Landing on the IR with the designation to return doesn’t appear likely for Lewis, since that would sideline him for the entire first half, but the Saints will have to make do without him for at least the next month.

Let’s check in on a few other items from out of the league’s two South divisions…. 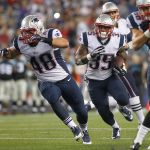