MONDAY, 1:13pm: The Seahawks have officially signed Jackson, according to the club’s website.

FRIDAY, 6:29pm: The Seahawks and free agent running back Fred Jackson have agreed to a one-year contract, tweets ESPN’s Adam Schefter. Financial details of the deal are not yet available.

Jackson, whom the Bills released earlier this week, visited the Seahawks on Tuesday. They were just one of several playoff 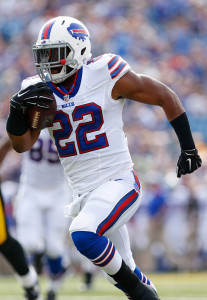 teams that expressed interest in Jackson, according to Ian Rapoport of NFL.com (Twitter link).

Seahawks head coach Pete Caroll was excited about Jackson after his visit with the team, saying, “I really, really like the kid. We all did,” per The Seattle Times’ Bob Condotta.

Despite being the oldest running back in the NFL, Jackson, 34, was in high demand after a terrific eight-year tenure in Buffalo. He totaled 5,646 rushing yards and 30 touchdowns on the ground as a Bill after signing with the club as an undrafted free agent out of Division III Coe College. In addition to his prowess as a runner, Jackson was also a quality blocking back and receiving option for the Bills, catching 322 passes (including a career-best 66 last year) and seven more scores.

In Seattle, Jackson will reunite with ex-Bills teammate Marshawn Lynch to once again form a dynamic one-two punch in the backfield and further beef up the league’s reigning top-ranked ground attack. The two played together in Buffalo from 2007-10 and combined for three 1,000-yard rushing seasons. Pro Football Talk’s Mike Florio reported earlier this week that the friendship between Jackson and Lynch was the primary reason for the interest Jackson and the Seahawks had in each other.

Jackson is expected to supplant Robert Turbin, who’s currently felled by a high ankle sprain, and Christine Michael as the Seahawks’ primary backup to Lynch.