The Raiders will release quarterback Christian Ponder, according to ESPN’s Adam Caplan (Twitter link). As a result, Oakland will absorb $1.5MM in dead money this year, per Caplan (via Twitter). Ponder’s departure means Matt McGloin will serve as Derek Carr‘s primary backup.

Ponder, a first-round pick from Florida State in 2011, spent the first four years of his career as a Viking. He appeared in 38 regular-season games and made 36 starts, struggling throughout his tenure in Minnesota to live up to his draft status. The 27-year-old threw 38 touchdowns against 36 interceptions and had a sub-60 percent completion rate with the Vikings. His best season was 2012, when he threw 18 TDs and 12 picks for a playoff-bound team.

The Raiders signed Ponder to a one-year, $2.25MM deal during the offseason in the hopes that he’d replace Matt Schaub as a quality backup for Carr. However, he was outdone in the preseason by McGloin and will now look for work elsewhere. 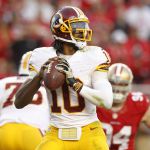 Buccaneers’ Kenny Bell Out For Season