After reporting yesterday that the Panthers and Luke Kuechly were nearing a new deal, Rand Getlin of Yahoo! Sports says today (via Twitter) that the two sides have reached an agreement. The star linebacker will get a five-year, $62MM contract, according to Getlin. That makes Kuechly the NFL’s highest-paid inside linebacker, as he surpasses Bobby Wagner‘s $10.75MM annual salary. 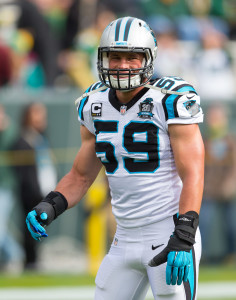 Kuechly, 24, has established himself as one of the game’s best defenders since entering the league in 2012. The Boston College product has started all 48 regular season contests during his three-year career, averaging 167 tackles, two sacks, two interceptions and 10 passes defended per season. The former ninth overall pick has received his fair share of accolades, winning the 2013 Defensive Player of the Year and the 2012 Defensive Rookie of the Year. He’s also been named to a pair of Pro Bowls and All-Pro teams.

Pro Football Focus’ data (subscription required) confirms Kuechly’s dominance. After ranking seventh in his rookie season and eighth in 2013, Kuechly placed first among all qualified inside linebackers last season, with a +28.4 overall grade. That grade was buoyed by a strong performance against the pass, as he easily ranked as the league’s best coverage inside linebacker, per PFF.

Despite his impressive résumé, Kuechly was never in line for the sort of megadeal that the league’s best quarterbacks or pass rushers can land. However, as I wrote last month when a report suggested extension talks between the two sides were heating up, Kuechly had a strong case to land an average annual salary of $12MM, after Wagner set a new standard for inside linebackers earlier this year. The new deal will pay the Panthers’ star $12.4MM per year.

It’s not yet clear how long the Panthers have now locked up Kuechly — he still had two years remaining on his rookie contract, including a fifth-year option worth $11.058MM in 2016, so five new years would take him through the 2021 season. However, that ’16 year may be included in the initial reports on his new deal. We’ll wait for further word to find out for sure.

In any case, it’s the latest contract extension in an offseason full of them for the Panthers. So far this year, the team has also locked up quarterback Cam Newton, tight end Greg Olsen, and Kuechly’s fellow linebacker Thomas Davis. GM Dave Gettleman had indicated earlier this year that this offseason would be less about bringing in outside players and more about Carolina securing its core pieces for the future.