The Chargers technically have until March 23 to decide whether or not they’ll join the Rams in Los Angeles for the 2016 season, but the team’s decision is expected well before then, writes Kevin Acee of the San Diego Union-Tribune. According to Vincent Bonsignore of InsideSoCal.com, the Chargers would like to decide within the next two or three weeks whether a deal can get done with the Rams, meaning there could be some sort of resolution around the time of Super Bowl 50. 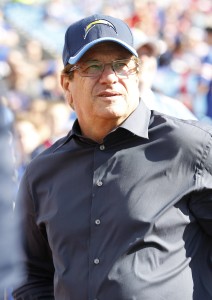 [RELATED: Which teams voted no on Rams’ Inglewood proposal?]

While most NFL team owners expect the Chargers to ultimately make the move to Los Angeles, owner Dean Spanos reached out to San Diego mayor Kevin Faulconer on Thursday, months after disengaging from stadium talks with the city, according to Acee. Spanos and Faulconer didn’t set a time or date for a subsequent meeting, but the mayor tells Acee that the tone of the call, which lasted about five minutes, was cordial.

“I said very clearly to him I would welcome the opportunity to get together at his earliest convenience,” Faulconer said on Friday. “I told him we can discuss a variety of different options on how to move forward.”

One league source suggests to Bonsignore that it makes sense for the Chargers to commit to San Diego for a year, rather than rushing into an L.A. deal with the Rams: “See where it gets you. Have a vote. Get finality.” In theory, that’s probably good advice, but Spanos and company may not want to fall behind the Rams and let Stan Kroenke‘s club get a leg up in L.A.

So even though San Diego remains a possibility for the Chargers, the team is expected to meet with the Rams soon, and according to Acee, multiple sources expect the Chargers to reach an agreement in principle with the Rams before seriously re-engaging the city of San Diego.

The possibility that Kroenke will play hardball with Spanos and the Chargers doesn’t look like a potential roadblock for the Los Angeles negotiations, according to Bonsignore, who writes that the Rams owner promised his fellow owners that he will “work fairly and honorably” with Spanos. NFL sources tell Bonsignore that the Chargers will essentially have 30 other partners in discussions with Kroenke, plus commissioner Roger Goodell, ensuring that they’ll avoid any pitfalls or surprises and will get a reasonable deal from the Rams.

As we wait to see which direction the Chargers go, let’s round up a few more items related to Los Angeles, the Rams, the Chargers, and the Raiders….

Drew Brees expected to return in 2019