FRIDAY, 10:06am: The Giants and Manning have reached an agreement, reports Chris Mortensen of ESPN (Twitter link). According to Mortensen, the team agreed to include a no-trade clause, while Ralph Vacchiano of the New York Daily News tweets that the deal features a $31MM signing bonus.. Manning will sign the contract today, per Rapoport (via Twitter).

THURSDAY, 4:46pm: Manning’s deal will be four years, $84MM with $65MM guaranteed, but specifics still need to be worked out between both sides, Dan Graziano of ESPN.com tweets. It is expected that the extension will include a no-trade clause, Ian Rapoport of NFL.com tweets. 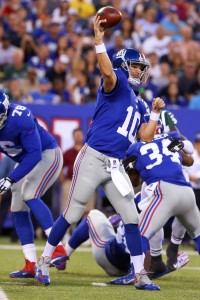 The last major holdup is whether Manning’s guaranteed money will have offset language, Mike Florio of PFT tweets.

4:05pm: The Giants and Eli Manning are finalizing a four-year, $84MM extension, according to Ian Rapoport of NFL.com (on Twitter). The deal could be signed tomorrow as there are just a few details to be ironed out.

Previous reports have indicated that the two sides were likely to get something done before the official start of the Giants’ season. Earlier today, Adam Schefter of ESPN.com reported that a new deal for Eli would likely net him north of $20MM. Now, it sounds like he’ll be taking in a healthy AAV of $21MM.

For his part, Manning has mostly avoided discussing his contract, which expires at season’s end, suggesting that his focus is on football. But the two-time Super Bowl MVP recently addressed the issue on New York radio.

Last month, a report suggested that Manning’s agent, Tom Condon, was seeking to make the Giants signal caller the highest-paid player in the NFL. Days later, Manning vehemently denied making any such demand and his soon-to-be-signed extension might be a sign of that.

Rather than the $22MM AAV that Aaron Rodgers has, this reported deal would put him shoulder-to-shoulder with Philip Rivers, who inked a four-year, $84MM extension this summer. In addition to Rivers, Ryan Tannehill, Cam Newton, and Ben Roethlisberger are among the signal-callers who have signed new deals in 2015 averaging between $19-22MM per year.

Olsen could be limited in return

Todd Gurley demoted, Ito Smith the lead back for now

Matt Jones could lose some carries

10 Big-Name Fantasy Football Players Who Always Let You Down