Most of today’s news is related to cuts, waiver claims, and practice squad signings, but let’s take a look at a few notes concerning some unsigned free agents…

Fournette out with quad injury 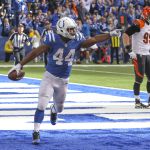