Eagles’ Kiko Alonso Could Be Done For Season

Following tests today, there’s a possibility that Eagles linebacker Kiko Alonso will be lost for the season with a knee injury, sources tell Mike Garafolo of FOX Sports (via Twitter). It was reported on Monday that Alonso doesn’t believe he has an ACL injury, but it’ll be the doctor’s opinion that matters most. Alonso also suffered a left knee injury in 2014 which wiped out his season.

Alonso, of course, came to the Eagles in the offseason blockbuster that shipped LeSean McCoy to the Bills. For Philly, Alonso’s appeal went beyond his Oregon pedigree and low salary cap number, though those things didn’t hurt his cause, either. Alonso was being counted on to give the Eagles’ front seven some major production, but it now appears that his 2015 season could be in jeopardy.

Alonso, 25, didn’t see the field in 2014 after tearing his ACL in July of 2014. After being selected in the second round of the 2013 draft, Alonso finished second in voting for Defensive Rookie of the Year after totaling 87 tackles, four interceptions, and two sacks. At the time, he was one of only three linebackers to play 100% of his team’s snaps and many thought he should have been the choice for DROY over Jets defensive tackle Sheldon Richardson. PFF (subscription required) rated Alonso as the ninth-best inside linebacker in the NFL in his rookie season. Because Alonso spent 2014 on the NFI (non-football injury) list, he’s slated to be a restricted free agent after 2016. 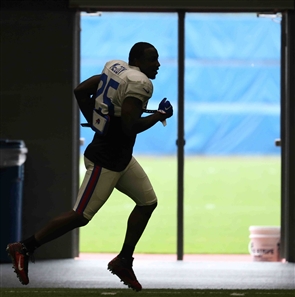