The Cowboys have cut linebacker Jasper Brinkley, according to Todd Archer of ESPN.com (on Twitter). The move will make room for newly-acquired offensive tackle Jordan Mills. Brinkley’s deal included $2MM cash, so Dallas will be on the hook for some considerable cash.

Brinkley, 30, signed a two-year deal with the Cowboys this summer and he said that he was partially motivated by the chance to reunite with defensive coordinator Rod Marinelli.

Brinkley started 11 games for Minnesota last season, compiling 54 tackles and one sack. Prior to that, the veteran played for Arizona in 2013 before returning to the team that drafted him in the fifth round of the 2009 draft. As a two-down linebacker Brinkley was expected to allow the Cowboys to shift Sean Lee from inside linebacker to weak-side linebacker. Instead, he’ll be looking for work elsewhere. 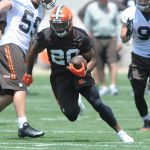 Fournette shaping up to be game-time decision?