8:24pm: The two sides have reached agreement on a four-year, $43.6MM extension, a person with knowledge of the deal tells Michael Marot of The Associated Press.

2:29pm: Castonzo will get a four-year extension worth $42MM, sources tell Rapoport (Twitter link), who adds that the Colts tackle will get $35MM in the first three years of the deal.

2:24pm: After locking up wide receiver T.Y. Hilton earlier in the preseason, the Colts appear poised to sign another key offensive player to a new contract. According to Ian Rapoport of NFL.com (Twitter links), Indianapolis is finalizing an extension for left tackle Anthony Castonzo, and will pay him $10.5MM annually on the new deal. 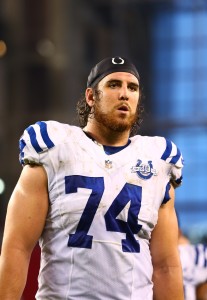 Castonzo, who turned 27 last month, took over the Colts’ left tackle job on a full-time basis shortly after being selected by the club in the first round of the 2011 draft. In 2013, he ranked 27th out of 76 qualified offensive tackles, according to Pro Football Focus’ advanced metrics (subscription required). In 2014, he placed 12th out of 84 qualified tackles, further increasing his value to Andrew Luck and the Colts.

While owner Jim Irsay indicated this summer that an extension for Luck would likely have to wait until 2016, he suggested that locking up Hilton and Castonzo, who had both been set to enter contract years, would be a top priority for the Colts.

“We have a little time with trying to work on a few extensions,” Irsay said. at the end of July. “There’s no reason Anthony Castonzo and T.Y. Hilton can’t get done. Look for us to keep core players and our top players. I don’t think it’ll be a distraction. I can’t see why we can’t get something done before Labor Day with T.Y. and Anthony.”

The Colts may not have quite met that unofficial deadline of Labor Day, but they were fairly close. Their pending agreement with Castonzo is the latest in a string of new contracts for left tackles around the league — Washington’s Trent Williams signed a mega-deal worth $13MM+ per year at the end of August, and the Patriots extended Nate Solder through 2017 earlier this week.

At $10.5MM per year, Castonzo will earn a top-five salary for left tackles, equaling Ryan Clady‘s per-year figure for the Broncos, according to Over the Cap’s data. Castonzo had been set to earn a $7.438MM for the 2015 season.