Tight end Tyler Eifert was the second first-round rookie from 2013 to see his fifth-year option exercised, as the Bengals picked up their 2017 option for Eifert on Thursday. As such, Cincinnati will control Eifert for the next two seasons, but the club wants to keep the young pass-catcher around beyond that, as Paul Dehner Jr. of the Cincinnati Enquirer reports that the Bengals want to eventually sign Eifert to a long-term contract. 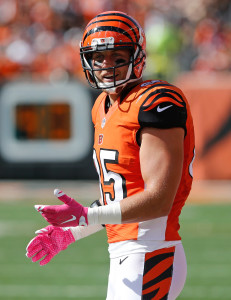 The news doesn’t come as a huge surprise, as most teams would probably like to extend their young stars. However, the key word in Dehner’s report is “eventually” — as the Enquirer scribe details, the Bengals will likely follow a similar timetable to the one used with wide receiver A.J. Green. Green, a first-round pick in 2011, had his fifth-year option exercised prior to the 2014 season, but didn’t agree to a long-term deal until September 2015. If the Bengals employ the same schedule with Eifert, he won’t be extended until next fall.

Eifert, 25, had a breakout season in 2015, earning his first Pro Bowl nod since entering the league as the 21st overall pick in 2013. After spending the majority of the 2014 season on injured reserve, the Notre Dame alum hauled in 52 passes for 615 yards and 13 touchdowns in just 13 regular season contests last year.

Eifert may take on an even larger role in the Bengals’ passing game in the 2016 season, with secondary receivers Mohamed Sanu and Marvin Jones no longer in the mix. Cincinnati signed Brandon LaFell as a free agent to help complement Eifert and A.J. Green, and the team figures to address the wide receiver position in the draft as well, but Eifert may be in line for a career high in targets next season.

Rams To Meet With Jared Goff And Carson Wentz