The revamped Philadelphia Eagles got off to a slow start Monday against the Atlanta Falcons in Week 1, but quarterback Sam Bradford caught fire in the second half to spark Philadelphia’s offense.

Bradford fulfilled the fantasy promise he presented on paper, refusing to be rattled by early adversity to run coach Chip Kelly’s offense like a well-oiled machine as the game wore on.

Check out the final numbers for Bradford, Matthews and Ertz below, along with fantasy advice for each player.

Bradford was solid in his Eagles debut. He got into a rhythm after the halftime break as Philadelphia’s uptempo mindset began to take a toll on the Falcons defense.

No matter how Kelly devises game plans moving forward, though, the Eagles’ style of play will lead to a ton of plays being run more often than not. That alone makes Bradford as a surefire QB1, provided he can remain healthy.

Questions will linger about Bradford’s durability, but he was hit eight times Monday and held up fine. Until further notice, Bradford is worth starting and will yield solid value for the time being in one-week leagues on DraftKings and FanDuel.

Despite sporting a 6’3″, 212-pound frame often reserved for red-zone targets on the outside, Matthews has proved to be quick enough to line up in the slot and thrive.

The fact that Matthews can play any receiver position in Philadelphia’s system will allow him to draw favorable matchups no matter what scheme the opposing defense. Kelly will continue to have Matthews at the foundation of the Eagles passing attack, thus making him a fantasy WR2 with WR1 potential.

Matthews is going to have a bitter taste in his mouth for letting a pass on Philadelphia’s final possession slip through his hands, resulting in a game-sealing interception for Atlanta. It’s all the more reason to deploy Matthews next week and beyond.

Bradford has only one start under his belt, yet it’s safe to presume Matthews’ versatility makes him the go-to guy. His proficient and productive 10 catches on 12 targets were a great start—and Matthews was likely robbed of a TD when officials spotted one of his receptions at the 1-yard line.

When Bradford found Ertz, the results were savory, but buyers ought to be wary of Ertz for now. Although he was fine for Week 1, Ertz was questionable leading up to Monday with a groin injury. That’s something to monitor, especially given the physical nature of Ertz’s position.

There’s no denying Ertz has the upside of a TE1. He did have 702 receiving yards in 2014, and owners could do a lot worse than Ertz.

Ertz’s value and skill set is suited for the scoring zone. The Eagles are geared to run it near the goal line, though, as Ertz reeled in in only three touchdown receptions among his 58 catches last year.

Stafford’s status is in doubt for Week 15 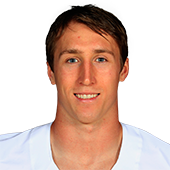