DeSean Jackson has setback with hamstring

Team hopeful he will play in Week 6

Things were moving in the right direction for WR DeSean Jackson to return to action against the Jets this week, but Thursday’s practice may have thrown a wrench in the works.

Redskins HC Jay Gruden said, via Liz Clarke of the Washington Post, that Jackson was pulled out of Thursday’s session after feeling a “twinge” in his injured hamstring while trying to run down a deep pass. Jackson hurt the hamstring in the season opener in a similar fashion and has missed the last four weeks while recovering. (Pro Football Talk)

Nerdy Football Analysis: Gruden is hopeful about Jackson being available to face the Jets, but Thursday’s setback suggests he’ll probably limited even if he suits up. In the likely event he sits, Pierre Garcon and Jamison Crowder can be viewed as low-end WR3s based solely on the amount of targets they are likely to see, even in a difficult matchup. 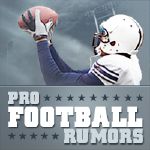