Nerdy Football Analysis: Kelce appeared to tweak his hamstring last week during the Divisional Round game against the Texans but continued playing on his way to a 10-134-3 line. He’ll likely be limited the rest of the week but should be out there on Sunday against the Titans. 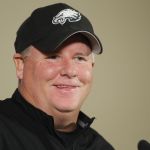