Kearse and Roberts could start

Nerdy Football Analysis: It appears Anderson will miss this game with a sprained ankle leaving the Jets extremely thin at the wide receiver position. Kearse, Roberts and newly signed Matthews could be the top three wideouts for rookie Sam Darnold against the Bears. Kearse would be the most viable fantasy asset but doesn’t come with a lot of conviction. 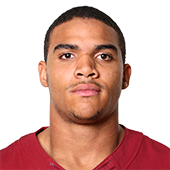 Doyle and Vinatieri expected to play in Week 8